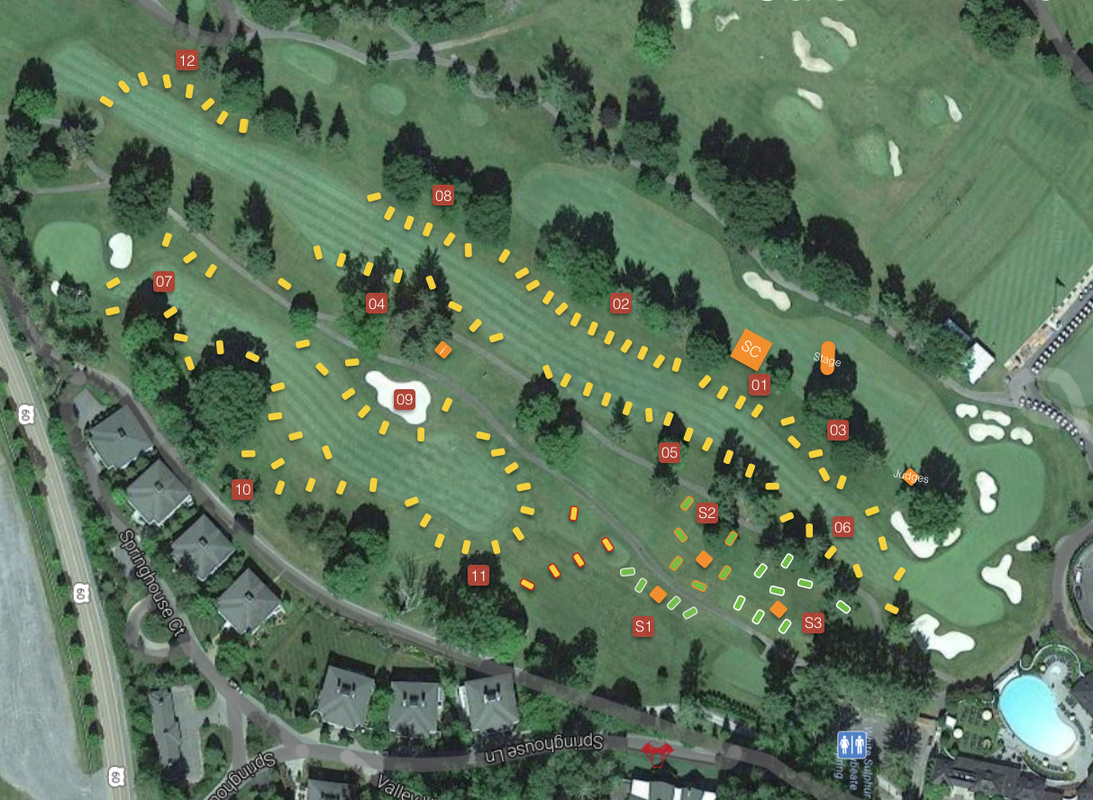 Below, please find the cars displayed on the 2018 showfield.  Each group is presented directly after the Class Description.

At the Greenbrier Concours d'Elegance we define the "Brass Era Cars: 1895 to 1915" class of cars as vehicles from the early period of automotive manufacturing, named for the prominent brass trim used during this time for such things as lights and radiators. It is generally considered to encompass 1896 through 1915, a time when these vehicles were often referred to as horseless carriages.
​
​Elsewhere in the world, England in particular,  this period is further refined by antique car enthusiasts to consist of two classes called  "Veteran" (pre-1904), and "Edwardian" (1905- 1914) eras.

At The Greenbrier Concours d'Elegance we define "Classic Cars: 1925 to 1948" as being built between those years, limited in production, and unique in their engineering and styling. These were often the most expensive cars offered by the manufacturer the year they were built.

Please note that in November of 2016 the Classic Car Club of America (CCCA) made some refinement to the definition of eligible, unmodified cars that are called "classic." These cars are described as "fine" or "distinctive" automobiles, either American or foreign built, produced between 1915–1925 and 1942–1948.

Our definition for judging at The Greenbrier Concours d'Elegance is described in the first paragraph and varies slightly from the new CCCA definitions for purposes of our judging.
​
It should also be noted that in the UK, "classic cars" range from veteran, pre–First World War, to vintage, 1919–1930, to post-vintage (1930s).  Post–Second World War "classic cars" are not precisely defined and the term is often applied to any older vehicle.

​In a relatively short period of time, many other small companies followed the lead of the Duryea brothers,  but it wasn’t until Henry Ford introduced the Model T in 1908 that true mass production of the automobile was launched. Henry Ford manufactured almost a million Model T Fords per year from 1908 until 1927, using his now famous assembly line and large numbers of workers. Other car manufacturers followed in Ford’s steps, but none produced automobiles in the numbers Ford did until 1928, when Chevrolet production surpassed Ford for the first time. With automobile sales increasing annually, it soon became a race to see who could manufacturer and sell the most cars each year. This gave rise to a category of automobiles referred to today as “Production Cars."

At The Greenbrier Concours d'Elegance we define "Post-War Production Cars: 1946 to 1984" as cars that were mass produced and low in price to consumers. They were the cars made for the masses. These are the cars that will make patrons comment, "This is the car my dad had!"

A major change in automobile design since World War II was the popularity of ponton style, in which running boards were eliminated and fenders were incorporated into the body.

Automobile design and production finally emerged from the military orientation and the shadow of war in 1949, the year that saw the introduction of high-compression V8 engines and modern bodies from General Motors' Oldsmobile and Cadillac brands in the United States. Hudson introduced the "step-down" design with the 1948 Commodore, which placed the passenger compartment down inside the perimeter of the frame. That was one of the first new-design post-war cars made and featured trend-setting slab-side styling.
​
Throughout the 1950s, engine power and vehicle speeds rose, designs became more integrated and artful, and automobiles were marketed internationally.  Nash introduced the Nash Rambler, the first successful modern compact car made in the United States, while the standard models produced by the "Big Three" domestic automakers grew ever larger in size, featuring increasing amounts of chrome trim, and luxury as exemplified by the Cadillac Eldorado Brougham.

The market changed in the 1960s, as the United States' "Big Three" automakers began facing competition from imported cars. The success of American Motors' compact-sized Rambler models spurred GM and Ford to introduce their own downsized cars in 1960. Performance engines became a focus of marketing by United States automakers, exemplified by the era's muscle cars. In 1964, the Ford Mustang developed a new market segment, the "pony car." New models to compete with the Mustang included the Chevrolet Camaro, AMC Javelin, and Plymouth Barracuda. Captive imports and badge engineering increased in the United States.

The term badge engineering is an ironic misnomer, in that little or no actual engineering takes place.
The term originated with the practice of replacing an automobile's emblems to create an ostensibly new model sold by a different marque. Changes may be confined to swapping badges and emblems, or may encompass minor styling differences, as with cosmetic differences to headlights, tail lights, front and rear fascias and outer body skins. More extreme examples involve differing engines and drivetrains. The term badge engineered does not apply to vehicles that share a common platform architecture but are uniquely designed so that they may look completely different from each other. This is achieved by not sharing visible parts, and maintaining a host of underlying parts specific to their respective applications.
​
The 1970s were turbulent years for automakers and buyers, with major events reshaping the industry, such as the 1973 oil crisis, stricter automobile emissions control and safety requirements, increasing exports by the Japanese and European automakers, as well as growth in inflation and the stagnant economic conditions in many nations. Smaller-sized cars grew in popularity. The United States saw the establishment of the subcompact segment with the introduction of the AMC Gremlin, followed by the Chevrolet Vega and Ford Pinto. The station wagon's  body design was popular, as well as increasing sales of non-commercial all-wheel drive off-road vehicles.
4-2 1953 Mercedes Benz 220 Cabriolet A
4-3 1957 Chevrolet Bel Air
4-4 1963 Studebaker Avanti R2
4-5 1963 Jaguar  3.8 Litre Mark 2 Saloon
4-6 1967 Chevrolet Impala SS Convertible
4-7 1964 Chevrolet Impala
4-8 1973 Citröen SM
4-9 1971 Mercedes Benz 3.5 Coupe
4-10 1967 Chevrolet Indy 500 Pace Car

At The Greenbrier Concours d'Elegance we define "Foreign Sports Cars from 1946 to 1984" as cars that were built in places other than North America, and were normally two passenger vehicles which were agile and quick, as well as focused on performance.  They were often designed with aerodynamic and stylish bodies, which reflected a European influence.

​Many times they were low production automobiles. European automobile enthusiasts and manufacturers were
very competitive and soon every country had its outstanding manufacturers.  With so many countries each having their own ideas and engineers to turn them into reality, the winners soon became evident at the great road races like the Mille Miglia in Italy or the Lemans race in France.

At The Greenbrier Concours d'Elegance we define "Exotic Sports Cars : 1946 to 1984" as automobiles that are usually built by designers, engineers and artists that are almost unknown in working class circles.  They embrace styling and performance that contrast significantly with normal production vehicles.

At The Greenbrier Concours d'Elegance we define "Preservation Cars, up to 1984" as cars that are in their original, unrestored condition -- the condition they were in when they left the factory new. These cars have not had any repainting or reconditioning of the interior. Only items that are permissible to have been modified or changed are items that were expendable ,such as tires, hoses, belts, light bulbs and muffler.
8-1 1959 Mercedes 220S
8-2 1972 BMW 2002 tii
8-3 1967 Chevrolet Corvette
8-4 1973 Rolls Royce Drophead Rolls B
8-5 1976 Porsche 912E
8-6 1984 Porsche 911 Targa

The Greenbrier Concours definition of this category includes the "supercars" of the era starting in the early 1960s culminating in the late 1980s. We also include "pony cars" in this group for our classification.

At The Greenbrier Concours d'Elegance we define "Muscle Cars" as cars that generally refer to a variety of high-performance automobiles.The Merriam-Webster dictionary defines muscle cars as "any of a group of American-made 2-door sports cars with powerful engines designed for high-performance driving." A large V8 engine is fitted in a 2-door, rear wheel drive, family-style compact, mid-size or full-size car designed for four or more passengers. Sold at an affordable price, muscle cars where intended for street use and occasional drag racing.  They are distinct from two-seat sports cars and expensive 2+2 GTs intended for high-speed touring and road racing.  Typically an 8 -10lb per Horsepower ratio.

A "muscle car" is exactly what the name implies. It is a product of the American car industry adhering to the hot rodder's philosophy of taking a small car and putting a large-displacement engine in it. The Muscle Car is Charles Atlas kicking sand in the face of the 98 horsepower weakling.  The muscle car was designed for straight-line speed, and did not have the "sophisticated chassis", "engineering integrity", or "lithe appearance" of European high-performance cars.

In the United States, lightweight cars featuring high-performance engines were termed "supercar" before the classification of muscle car became popular. From the mid-sixties to the mid-seventies, what we now think of as muscle cars were more commonly called 'Supercars,' often (though not always) spelled with a capital S." This term described the "dragstrip bred" affordable mid-size cars of the 1960s and early 1970s that were equipped with large, powerful V8 engines and rear-wheel-drive.

"In 1966, the supercar became an official industry trend" as the four domestic automakers "needed to cash in on the supercar market" with eye-catching, heart-stopping cars.  Examples of the use of the supercar description for the early muscle models include the May 1965 Car Life road test of the Pontiac GTO along with how "Hurst puts American Motors into the Supercar club with the 390 Rogue"(the SC/Rambler) to fight in "the Supercar street racer gang" market segment.  Moreover, the "SC" in the model name stood for "SuperCar"

At The Greenbrier Concours d'Elegance we define "Vipers" as cars  manufactured by Dodge (SRT for 2013 and 2014), a division of FCA US LLC from 1992 through 2017 having taken a brief hiatus from 2010-2013. Production of the two-seat sports car began at New Mack Assembly in 1991 and moved to Conner Avenue Assembly in October 1995.

Although Chrysler considered ending production because of serious financial problems, on September 14, 2010, chief executive Sergio Marchionne announced and showed a new model of the Viper for 2012.  In 2014, the Viper was named No. 10 on the "Most American Cars" list, meaning 75 percent or more of its parts are manufactured in the U.S.  The Viper was initially conceived in late 1988 at Chrysler's Advanced Design Studios. The following February, Chrysler president Bob Lutz suggested to Tom Gale at Chrysler Design that the company should consider producing a modern Cobra, and a clay model was presented to Lutz a few months later. Produced in sheet metal by Metalcrafters, the car appeared as a concept at the North American International Auto Show in 1989. Public reaction was so enthusiastic that chief engineer Roy Sjoberg was directed to develop it as a standard production vehicle.
​
Sjoberg selected 85 engineers to be "Team Viper", with development beginning in March 1989. The team asked the then-Chrysler subsidiary Lamborghini to cast a prototype aluminum block for the sports car to use in May. The production body was completed in the fall, with a chassis prototype running in December. Though a V8 engine was first used in the test mule, the V10, which the production car was meant to use, was ready in February 1990. Official approval from Chrysler chairman Lee Iacocca came in May 1990. One year later, Carroll Shelby piloted a pre-production car as the pace vehicle in the Indianapolis 500 race. In November 1991, the car was released to reviewers with first retail shipments beginning in January 1992.
11-1 1992 Dodge  Viper
11-2 1994 Dodge  Viper SRT 10
11-3 1996 Dodge Viper GTS Coupe
11-4 1999 Dodge Viper GTS ACR
11-5 2003 Dodge Viper
11-6 2005 Dodge Viper
11-7 2009 Dodge Viper / Hurst Edition
11-8 2010 Dodge Viper SRT ACR
11-9 2014 Dodge  Viper SRT
11-10 2014 Dodge Viper
11-11 2017 Dodge Viper